in Blog
We have more volunteers visiting the west of Kenya and are organizing another demonstration by Solar Cookers International (SCI) for the incredible invention that is SOLAR COOKING. 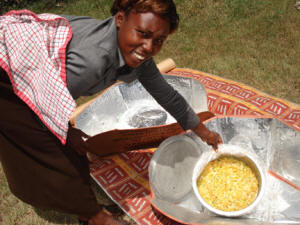 SCI has expanded its Kenya projects to two new communities: Kadibo, on the outskirts of Kisumu City, and Kajiado, to the south near the Kenya-Tanzania border.

Incredibly 20 local women have received training on how to make, use and sell solar CooKits (the cookers marketing name). During the first year of the project, SCI’s John Amayo and others have conducted 69 public solar cooking demonstrations, 209 group demonstrations, and six radio broadcasts. The women have earned income from over 230 CooKits sold thus far. Adjacent communities have begun requesting demonstrations, including Kibos, Vihiga, Maseno, Ahero, Kano, Machakos, Makueni, Magadi, Ngong’, and Namanga.