in Blog
The first 2 boxes of medical supplies arrived safely last week and were handed over for minimal handling charge. Yesterday evening Kenya Airways fantasticly flew the last 9 boxes of medical kit into Nairobi and Bramuel was there ready to collect. 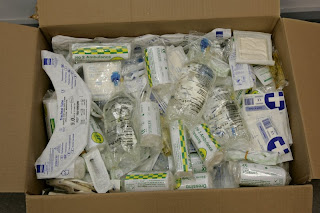 Unfortunately the same handling agent who passed over the first 2 boxes now believes they need an additional $200 to release the goods. The KRA agent is asking for the additional funds despite documentation from us stating these goods are nil value charitable donations and despite having formal documentation from the NGO Council regarding the ArrowWeb Hospital.

[4 March 2009 Update; official word is that the charges are all required as standard by the KRA (not
duty) but include a GOK fee? .. a small Kenya Airways handling/standard fee plus the KRA agent’s fee??]

The boxes of donated medical goods, from the Motorsport Medical Services, are for the ArrowWeb Hospital, in the Embakasi division around Nairobi which was established to help the community of an estimated 798,000 people plagued by poor health and living conditions. The project to improve the hospital is being ran online using the Netherlands-based NABUUR “virtual village” system where volunteers can simply log in from home to assist. The Kayole-Soweto project involves, specifically for this project, the input of over 60 professional members (including myself) from Canada, United Kingdom, Australia, United States, Poland, India, Uganda, Tanzania, Malaysia, South Africa, Netherlands, Kazakhstan, Thailand.