Thanks to Stacey for the title and her wonderful updates on her own blog. Canadian volunteer, Stacey, is definitely making an impression in the villages of Khalaba and Shibanze :

“Before I’d even left the project site [to go running], I was asked to jump up and down. I obliged, which the older ladies thought was pretty funny. After that I headed out on the open road. Basically everyone I saw was yelling ‘mzungu habari, mzungu habari‘ so I was pretty much constantly saying mzuri, mzuri in response. Similar to India, I also had many motorbikes and bicycles stopped to ask if I needed a ride, I must be in a rush. The best comment I got though, was an older lady who actually stopped me to ask ‘what is wrong!!’. It was pretty funny.”

Stacey has now been joined by Rachel (from Wales) in the west of Kenya at the Tumaini Centre. Already there is progress with sports and running groups, since Stacey is a keen runner. This picture is one of Staceys of a typical football made from plastic bags and twine. She purchased a “real” one too and has become very popular. 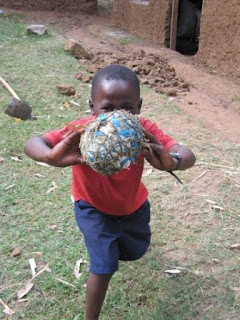 Stacey has been regularly updating her own blog which you can access here, one of many wonderful excerpts follows:

They have a big piece of plywood that they have painted black to make a chalkboard. The kids are learning the alphabet here, they point at it with a stick and have the other kids repeat after them. When they do a good job, the teachers says ‘mpigie makofi’ which means ‘clap for him/her’. The kids all clap and sing this song in english ‘well done, well done, try again another day, a very good girl/boy’. While they are singing the student at the front will dance. 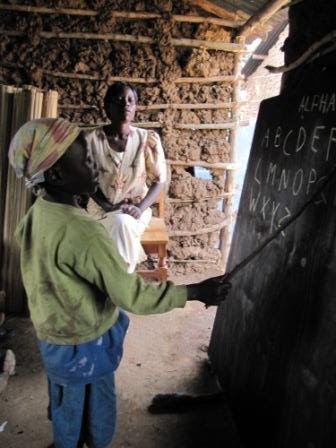 Stacey is now coaching Rachel in how to further the progress of the projects but, as Stacey writes,  “the project works in two separate villages, Khalaba and Shibanze. … Harambe is the closest town to these areas, but it is pretty small and Bungoma is the nearest bigger place. The project has two elementary schools, Tumaini Academy and Vision Academy. I will be volunteering at Tumaini Academy on Mondays and Thursdays and at Vision Academy on Tuesdays. On Wednesdays and Fridays I will be working on other things with the projects.”

We’ll update you as Rachel settles in ……….